Fed View: Upgrade to economic assessment, and taper talk to come in Q3 – The April FOMC meeting was largely free of fireworks, with upgrades to the characterisation of the recovery, and no hints yet on when a tapering of asset purchases might happen – as we had flagged in our preview. The main changes to the policy statement were on economic activity, which is now said to have ‘strengthened’ (rather than ‘turned up’), while inflation was said to have risen ‘largely reflecting transient factors’ (previously ‘continues to run below 2%’). In the press conference, Chair Powell was repeatedly questioned on inflation and the potential for an overheating of the US economy, given the rapid pace of recovery, and strong fiscal and monetary support. He continued to downplay these risks, saying that the build-up of inflationary pressure takes time, but said that the Fed would not hesitate to act if inflation rose ‘materially above 2% in a persistent way that risks inflation expectations drifting up’. The effect of bottlenecks on prices was said to have created some uncertainty in this regard, but the Fed judges this to be temporary and not something monetary policy should respond to. Powell was also repeatedly questioned on the issue of tapering, with the response being that it is ‘not yet time’ to talk about tapering given how far the Fed is still from its goals. Given the degree of labour market slack that will remain in the coming months – not only visible in the unemployment rate, but also in depressed participation – we expect the Fed to reach such a level of comfort with progress towards its goals in Q3, with an actual taper of purchases starting in early 2022. (Bill Diviney)

Euro Macro: Pace of vaccinations is picking up strongly in Europe – Over the past few months, we saw a plethora of bottlenecks around vaccine distribution in Europe. Initially, there were some diplomatic skirmishes between the UK and EU over supplies and potential export bans, and more recently the issue has been around the health and safety of adenovirus-based vaccines, namely the AstraZeneca and Janssen Covid-19 vaccines. Despite all these negative news items, we note that the pace of vaccination in Europe has picked up significantly, broadly in line with our expectations that Covid-19 vaccine supplies would start to arrive in larger numbers in April and especially in May onwards.

The daily pace of vaccinations in the EU has almost caught up with the daily pace in the US and UK, both of which have been amongst the fastest and most successful countries in rolling out Covid-19 vaccines to their own populations. Currently, the EU is inoculating just shy of 0.6% of the total population per day based on a 7-day moving average, compared to less than 0.4% per day before April and less than 0.2% per day prior to March. In tandem with more supply, including the potential approval of the Curevac vaccine later this quarter and even potential upside to our analysis if the Russian Sputnik V vaccine is approved and rolled out by EU member states (the EMA began a rolling review of the Sputnik V vaccine on 4 March 2020, see here), we should see the pace of vaccinations speed up even further and a much more significant relaxation of social distancing measures later this quarter. This will set the scene for a sharp bounce in economic growth in the coming months. (Daniel Ender) 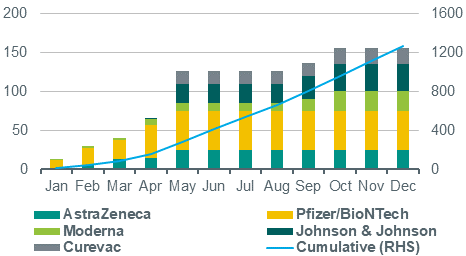 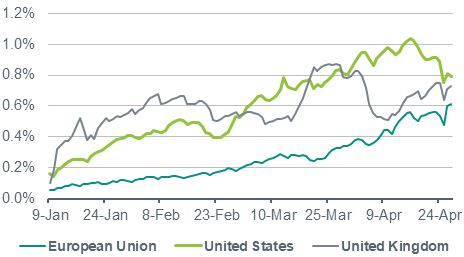