US Macro: Economy proves surprisingly resilient, despite third wave – Both the ISM and Markit PMIs declined only modestly in November, and remain at elevated levels in the high 50s, i.e. signaling continued strong growth in the manufacturing sector (the flash services PMI actually improved a notch, to 57.7 from 56.9). PMIs have been less instructive about the outlook during the pandemic than in normal times – and they may be missing the outsized impact on the hospitality sector, of which a large proportion are SMEs and are not covered by PMI surveys. However, taken at face value the reports do suggest economic growth has continued well into Q4, contrary to our expectation for a contraction on the back of renewed covid restrictions.

Currently hospitalised with covid-19 in the US (thousands) 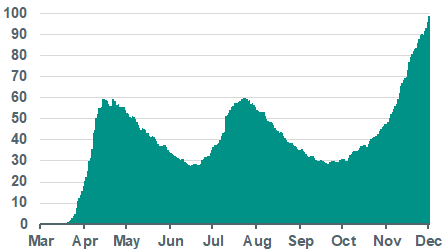 Indeed, the third wave in the US continues to put unprecedented strain on hospitals; patients currently hospitalised with covid-19 are on the cusp of topping 100,000 – far above the previous peaks in the first and second waves of around 60,000. To put this number in perspective: adjusted for population differences it is around double the peak number of hospitalisations we have seen in the Netherlands, which has been hard hit by European standards. Despite this, most states have so far resisted imposing even the most basic of new restrictions – the banning of indoor dining in restaurants – and yet some of the hardest hit states that have not tightened restrictions at all are seeing case numbers start to come down. Quite how this is happening, when many European countries have needed renewed lockdowns to curb case numbers, is not entirely clear. What is clear is that Republican states in particular are highly averse to lockdowns and will only implement new restrictions if hospital capacity becomes overwhelmed. For the US as a whole, case numbers remain elevated at around 160,000 new infections per day, but have at least stopped accelerating in recent weeks. We continue to think more states will follow in implementing partial lockdowns, but the breadth and the strictness of these lockdowns now looks to be less than we expected in our base case – suggesting upside risks to our GDP forecasts.

Hospitality is naturally the hardest hit by the third wave 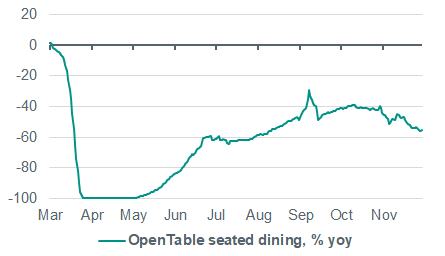 What has the tangible impact of the third wave been so far? The most visible impact has naturally been on the hospitality sector. At least a quarter of the US population lives in areas with bans on indoor dining, and the OpenTable data shows a fall of around 15 percentage points in seated dining over the past month – from around -40% yoy to -55%. The OpenTable data correlates well with the food services category of retail sales, suggesting a sharp drag from hospitality will be visible in the November data (released 16 December). At the same time, consumer confidence is also softening, with the expectations indices in both Conference Board and Michigan surveys falling back to near the lows for the year. With that said, the latest high frequency payments data to 22 November suggests that overall consumer spending has in fact increased, to a shortfall of -2.3% compared to January levels, up from around -5% a month ago (note that this data is seasonally adjusted, although it is not directly comparable to consumption in GDP). As such, while the hospitality sector is clearly being hit by the third wave, it appears consumer spending in other areas of the economy is for now offsetting that weakness. (Bill Diviney)